Under the management of Hussaini Foundation
Karachi, Pakistan0213-4538568-9

Under the management of Hussaini Foundation
Karachi, Pakistan0213-4538568-9

CASCADE TRAINING PROJECT IN PAKISTAN, GREECE AND AFRICA FUNDED BY UNIVERSITY OF LEICESTER AND ECONOMIC AND SOCIAL RESEARCH COUNCIL UK

COMET PAKISTAN 2022-2023, is a train the trainer project focusing on capacity building of the activists working in the community and to train them on the crucial topics of Child Mental Health. These training sessions are conducted by Professor Panos who is a Renowned Professor and Researcher from University of Leicester, The UK. Project implementation is under supervision of Dr. Sajida Hassan, Child Psychologist at Child and Adolescent Development Program-Hussaini Foundation. Project activities are designed and implemented by Ms. Zeenat Rizvi-Researcher and Psychologist affiliated with Child and Adolescent Development.

Under this project 4 targeted areas have been selected for Mental health awareness campaigns. Trainers who are receiving training regarding Child mental health are the ones already working in these communities. These four areas include Lyari, Saeedabad, Manzoor Colony and Manghopir. After completion of first module trainings, Trainers have to organized a pilot project for an evaluation of community’s understanding regarding mental health and also to evaluate their learning after attending sessions on child Mental health.

Team Manzoor Colony Organized Its Pilot Project on Saturday 24th June, 2022 at a community school in Manzoor Colony where youth from Diverse background attended the session. This is an under developed area where a lot of issues regarding mental health has been observed in recent past. The team Members Ms. Nida and Ms. Fatima organized the session focusing on the Key message of their Project that was to aware youth about the importance of Child Mental health in same way as we give importance to the Child’s Physical health. Some Glimpses of the vents are given. In this activity they build the foundation with general discussion and later moved towards the main message through the activity of strength and weakness. Here they tried to use the tree as a metaphor to child Mental and Physical Health. Participants were asked to mention the reasons or factors of two different trees that why the one that is weak lacks and what factors are making the strong tree strong. Children mentioned the reasons and then the trainers relate it to the child’s mental health. How a child’s mental health gets affected if there is any one thing lacking and how it affects its mental health too. The session had a great impact on youth and they pledge to spread awareness in their community regarding Child Mental Health. A small token of appreciation in form of small flower pot was given to the attendees of the session. Special Thanks to Ms. Fatima and Ms. Nida for outstanding efforts.

Team Lyari organized its Pilot Project on Sunday 25th June, 2022 in Collaboration with Lyari women Community Forum and Azme Lyari at a local Community Center. Lyari is the most critical area which is often labeled as No Go Area of Karachi as well but now the youth comittes are very active in this society and working for its betterment. Lyari people have experienced Violence and discrimination in the past which has left a huge negative impact on Mental Health of the children born in those year. With this Context, the session focused on Key Message of Risk and Protective factors that may occur in a child’s Mental Health. The session was attended by 27 Male sparticipants of community which is a success in itself because the mental health of male members of community is often neglected in Lyari and this was the first time only male participanst were given platform to discuss mental helath. In the session youth of diverse ethnic background who have experienced violence on the basis of sects/ Religion/ ethnicities were present. It was observed and even confessed by Participants that never in the past there was any session organized on the theme of child mental health in the vicinity of Lyari. This is the first time Lyarians got a platform to express and work for child mental health and they are willing to take part in such activities because in their views childhood trauma lasts forever. After the intense discussion through “Fish bowl” activity team also engaged youth in a RAP song activity where participants wrote a RAP song to spread awareness regarding Mental Health and soon will be launched on Social Media to reach out Mass audience. Special Thanks to Team Member Saqib Haroon, Hassan Afridi, Ali Akbar Soomro, Hira Rind for amazing step towards betterment.

Team Saeedabad organized its Pilot Project on Tuesday 28th June, 2022 at Hunarghar welfare Organization with a group of 25 Mothers with the theme of Art of Expression. Saeedabad is considered as the most neglected and one of the discriminated area of Karachi where basic facilities are not in reach of a common person. These females who were engaged in the session were from underprivileged background who never get a chance to attend schools for educational purpose. The activity which was designed by team Saeedabad was to break the ice and talk about Mental Health which is considered as Taboo in the community. At first the females were hesitant to attend and share about themselves but later they confessed about how they enjoyed the activity and felt mindful at the same time. The session had activity where paints and canvas were provided to the participants and asked them to draw whatever they have in their mind later when they painted the canvas they were given a chance to express themselves. A lot of thoughtful insights and expressions came out from Participants where they mentioned that this activity made them forget about everything for a while. Some of the females even mentioned that they never touched paints and never felt how it looks like. They mentioned that they were so relaxed at the moment that they were even able to smell the paints too which was a soothing experience for them. The session was concluded on the message that expressing about your emotions and feelings and seeking help is not a wrong practice. One should take care of the mental health for the sake of living happy healthy life. Special Thanks to Team Saeedabad Ms. Maria Taqdees and Ms. Marzia Mehdavi for great initiative.

Team Manghopir organized its Pilot Project on Monday 4th July, 2022 at The Learning House school with the theme of Positive Mental Health. Team conducted the session with 12 community women who belongs to Refugee and disadvantaged community to aware them about positive mental health, Self-care and Relaxation. As the refugee community faces a lot of difficulties in adaptation of new environment and also goes through a kind of trauma within themselves. Therefore, the team decided to relaxation and self-care activities to help them heal from the emotional issues they are going through. In this activity they brought two big size canvas and paints and participants were first asked to be relaxed before they start painting. Trainer helped them in relaxing by doing deep breathing exercise with them. Afterwards all of them started to paint whatever they wanted to do on the canvas. This activity was a great source of relief for the participants as they themselves were not ready to leave. These canvas had beautiful Messages related to mental Health and now will be hang on assigned wall of school to spread the message to larger audience. Special Thanks to Ms. Sakina Akram and Ms. Sultana for marvelous efforts. 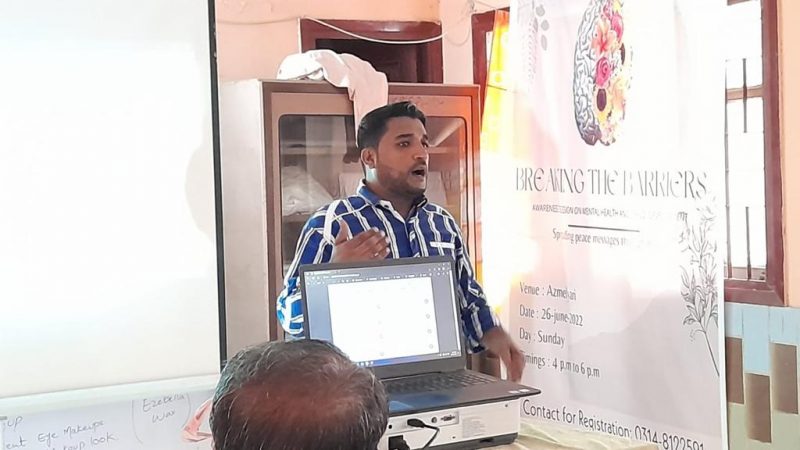 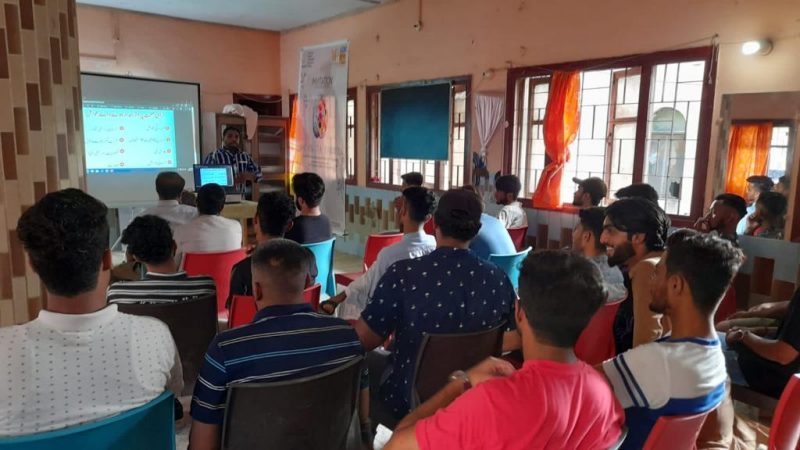 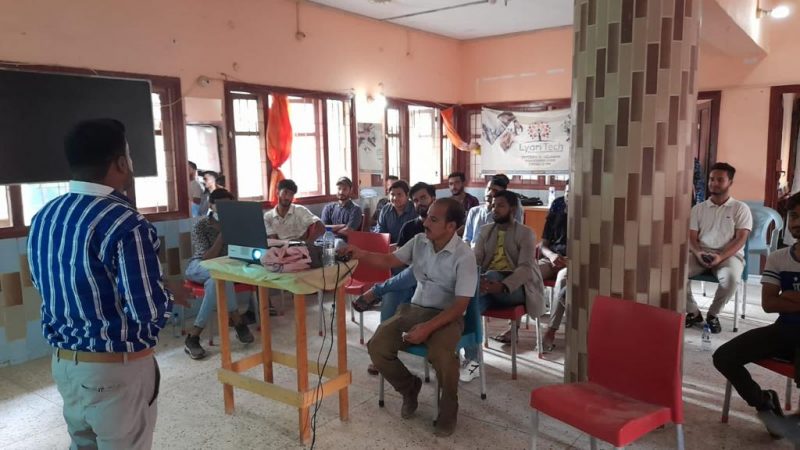 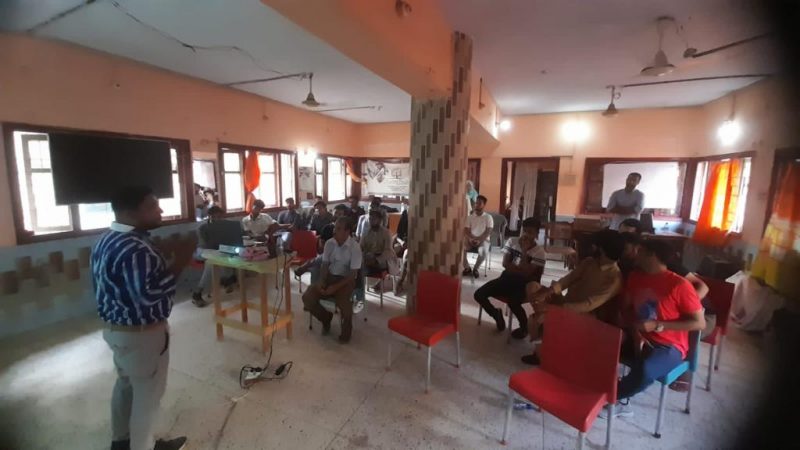 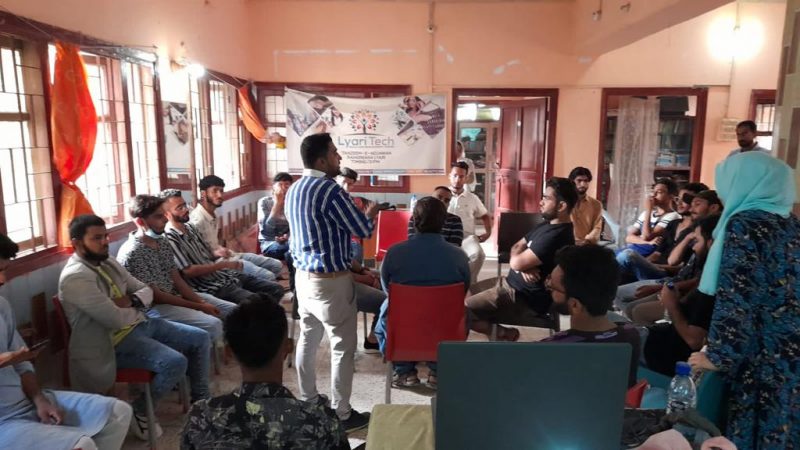 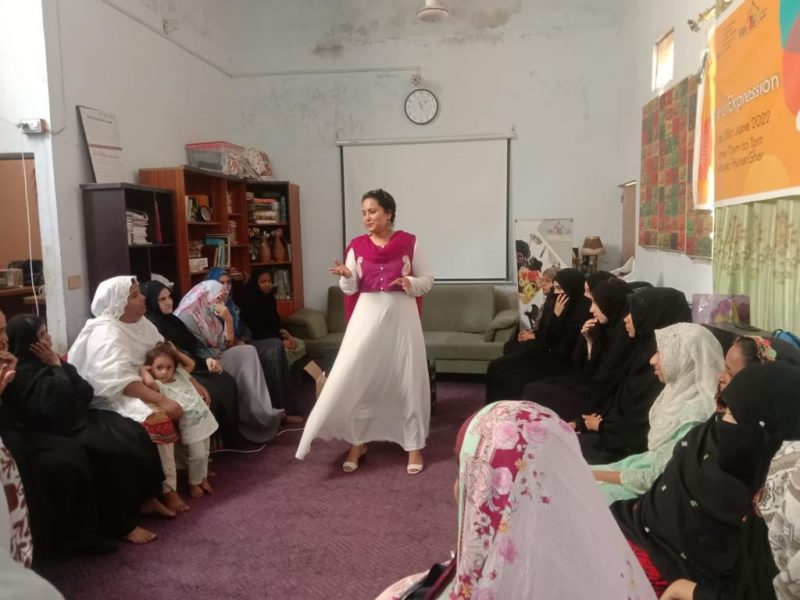 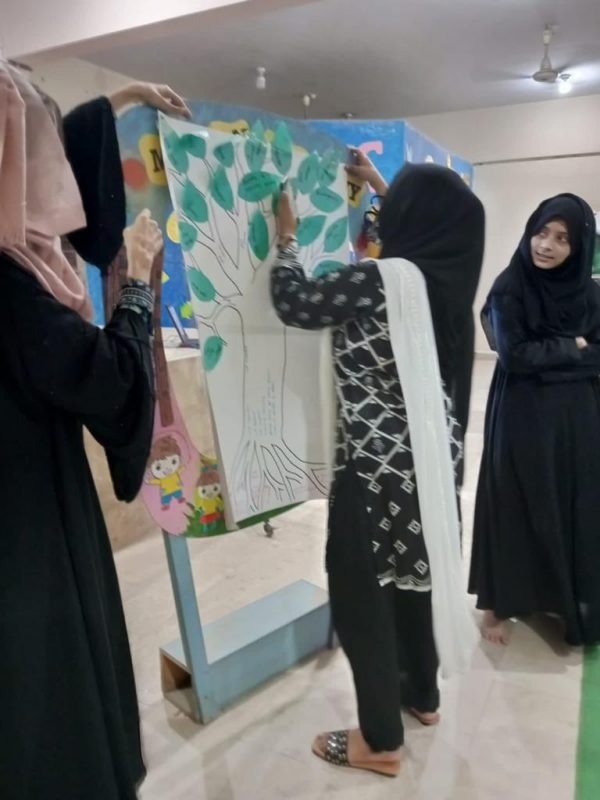 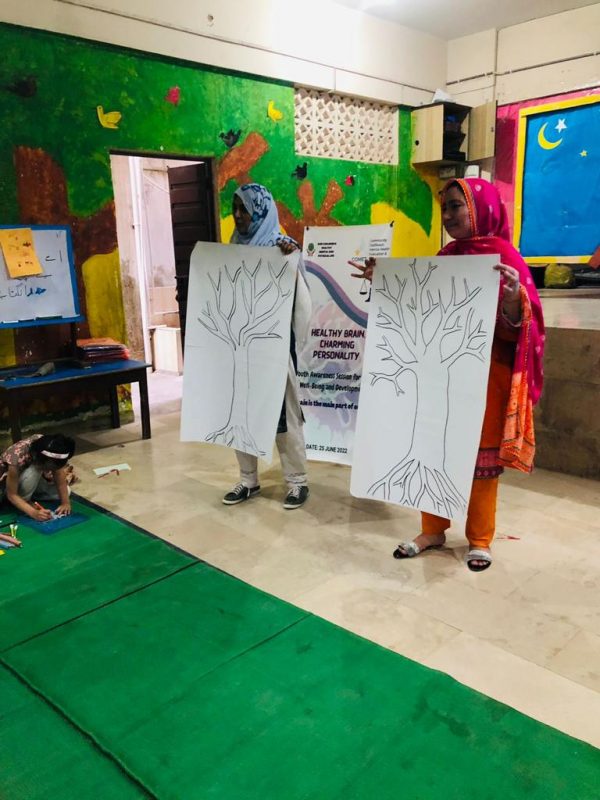 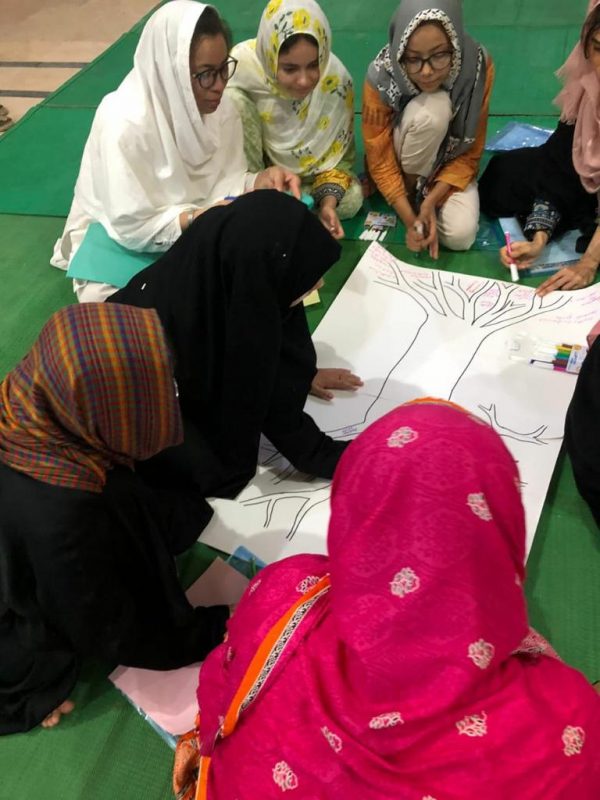 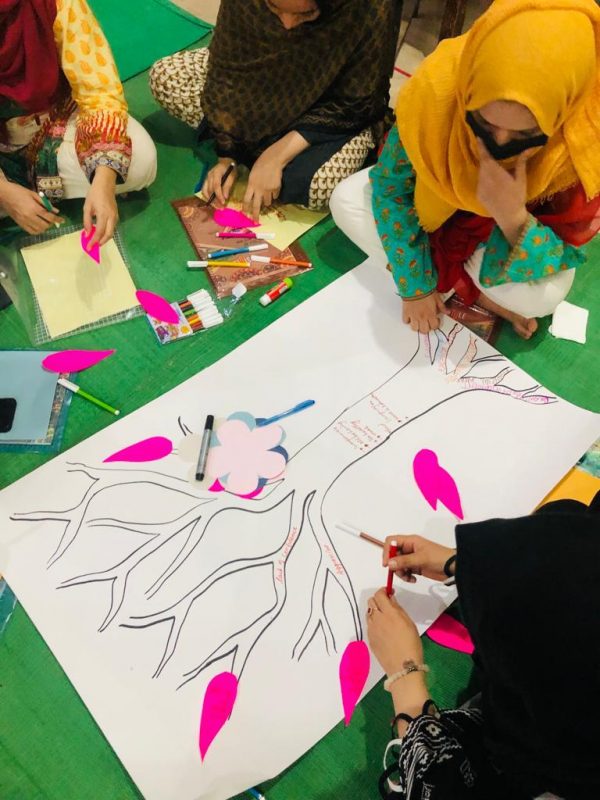 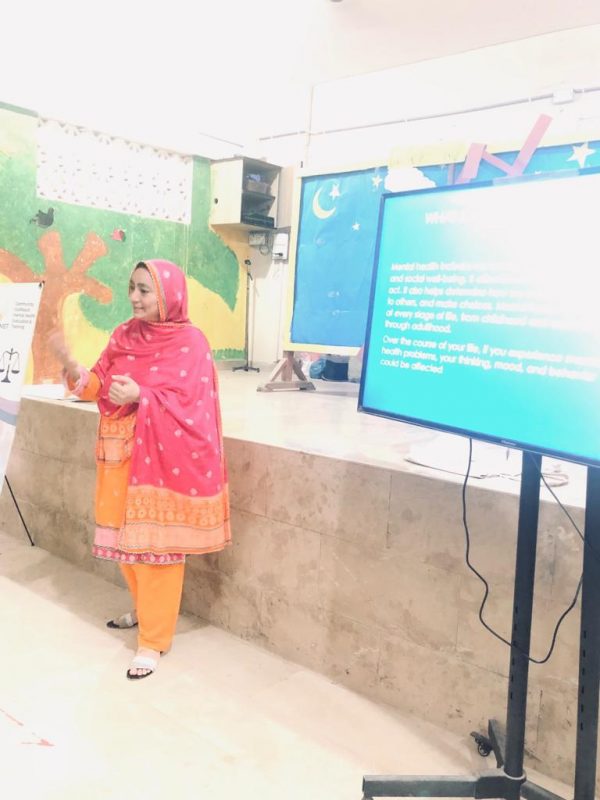 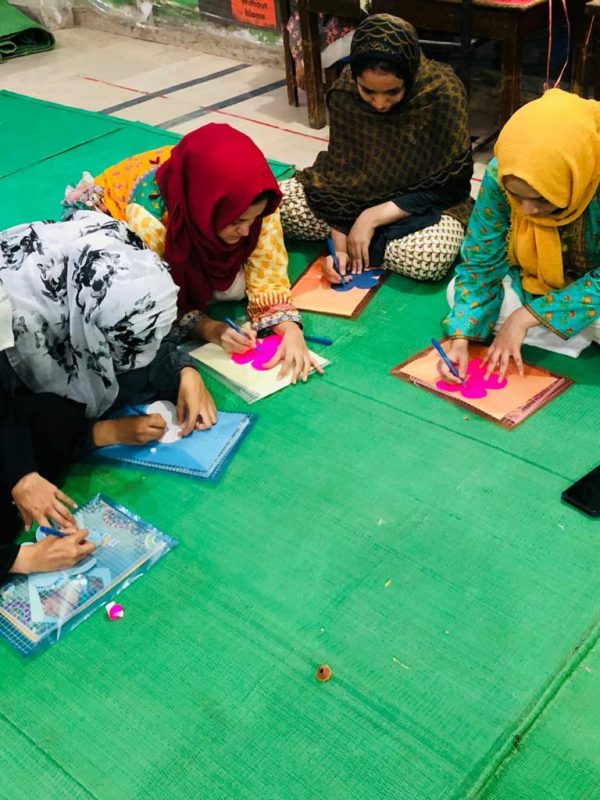 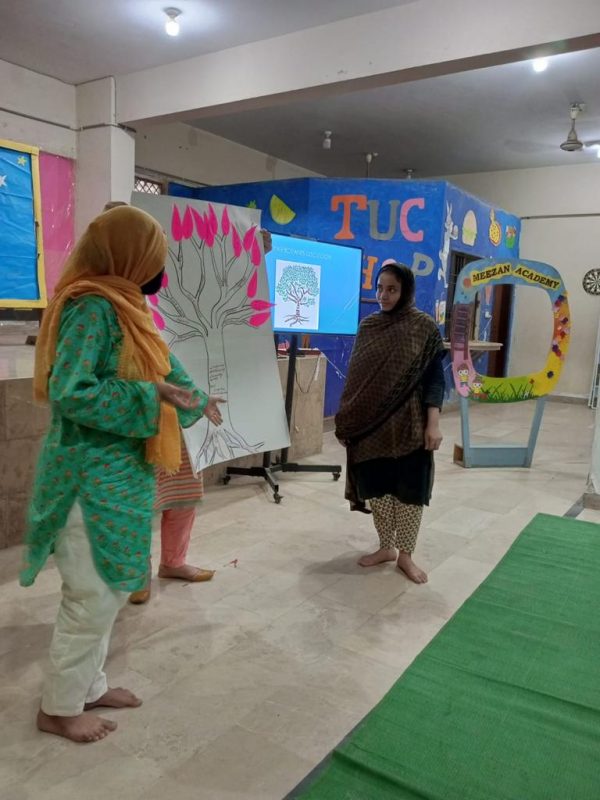 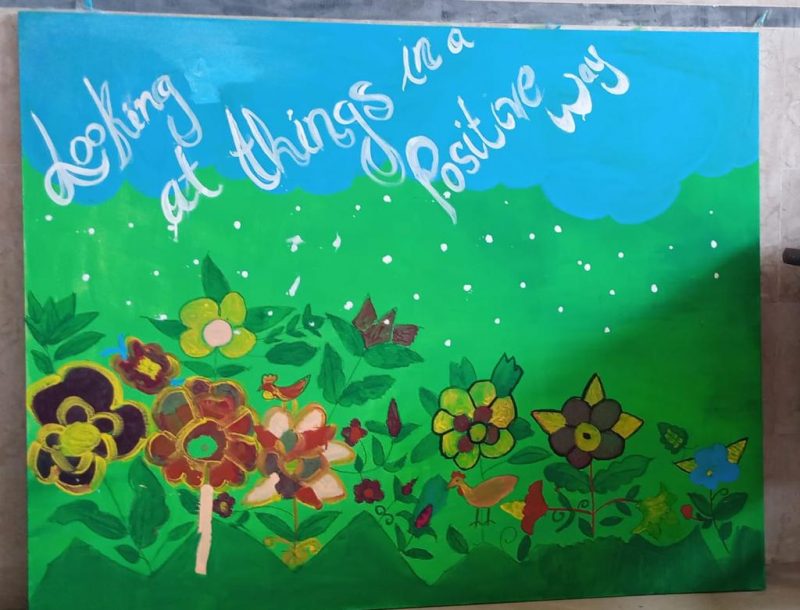 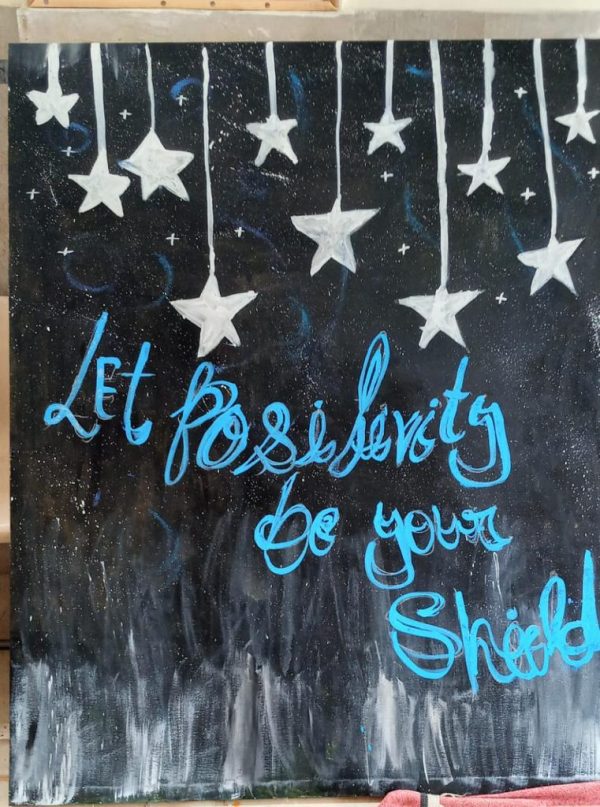